NewTek have announced that there is to be a LightWave 11!

Although it won’t actually be available until the end of the year, LightWave 10 and 10.1 users can upgrade to the latest version before the rest of the public. 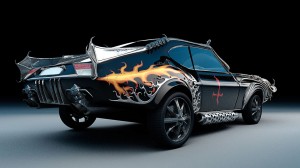 LightWave 11 takes the  animation, rendering and powerful 3D modelling, tools of the previous version and adds in some brand new features and improvements.

Another new addition to look out for is Instancing. This creates mass duplication of objects in a scene with virtual polygon counts, without huge amounts of virtual memory overhead and drawn-out render times.

If you’re animating herds of animals, you’ll also be very interested in the new Flock controller, which creates realistic natural motion across flocks by letting you set parameters for crowd avoidance, target alignment and avoidance.

One of the favourite tools in the previous version of LightWave was the Bullet Dynamics so users should look forward to the new improvements in version 11. It will now run directly in Layout so it can be used with the new Fracture tool. This will create animations with more natural, random fracturing and collapsing.

Among the other updates is Virtual Studio Tools, which lets you naturally animate your scenes using third-party controllers. In version 11 you can now configure more controller types, even including the Playstation Move control.

Depending on when users registered version 10 or 10.1 NewTek is charging between about $400 and $700 dollars to upgrade to the Pre-Release version of LightWave 11.

The Full UK pricing will be available when it comes out for the general public.

For more information or to purchase the current version of LightWave click here.